After 6113 miles driving through the US I arrived at the Pacific Coast. I took a deep breath in, and realised that I’d arrived at the end of a long road. It’s a road that has taken me now through China, Africa, Russia, Europe and the US. Along the way I’ve witnessed the world changing slowly around me, and sometimes, like during the long hours alone on the Trans Siberian Express, witnessed my own changing. The road has led me to many places I never intended to go to, and one of its gifts was, within the movement, to hear the calling of events, issues and sometimes screams – and to be drawn towards them READ MORE ☞ 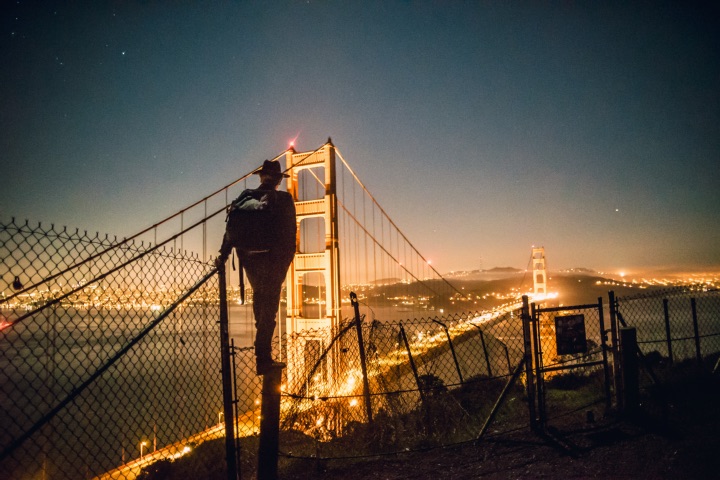 Sometimes there were moments where beauty and poignancy simply had no distinction, and where joy and suffering mingled with each other and changed forms. I remember in Bukoto Market in Kampala, and while playing a show while sat on the dirt a man with no legs came and danced on his hands next to me, and it was dancing like no one has ever seen. I remember sitting with Linda who’d lost her home in Austin, and while bedbugs crawled on the ground, listened to her talking about what really matters, and realising that her insight was nothing short than a street sermon. I remember how Muhammad would knock on Basti’s and I’s little yellow van in Idomeni, insist on giving us his supper, and then wickedly tease, with glinting eyes and devilish laugh, at how lucky we were to have the “Penthouse Suite” of Idomeni.

Each person I’ve met has broadened my soul, and each person I keep in a little room in my heart. Sometimes along the way I’ve felt fear. In Macedonia with those soldiers eying my muddy shoeless feet, or waiting for Hurricane Matthew to hit in South Carolina. But those moment doubled down how much I wanted to live, how deep the realisation of the miracle of our one life. And in case there was any doubt, I saw that will to live reflected it in the eyes of a little girl arriving on Lesvos in the dead of night on the stormy edges of our continent. When back I joined the Brexit protest in the UK, and watched in disbelief the car crash in slow motion in the US. It’s not the politics that I comment on here, it is the fear and the hatred which has grown in our society like a cancer. It is so opposite of my experience of the world. Of how much people want – in real terms – to love one another. How they want, through any hell, just to live.

As I looked out on the Pacific Coast I wondered where all the fear comes from. I’ve been bought drinks by raving Chinese rappers, given shelter in random Russian’s houses in Siberia, been guided to safety by a Masai near alligator infested waters, given food by refugees with nothing and watched, listened to the wisdom of the homeless and marvelled at their dignity. And all the while, as this faceless hatred grow, I’ve recognised its base in illusion, in fear, of simply not knowing. Because when you are guided when you are lost, sheltered when you are cold and given food when you are hungry, your view point of the world is not one of fear, but of thankfulness, of marvelling, of recognising that fear only exists inside ourselves and what we, ourselves, project onto other people.

So after those thousands of miles, the strangest experience for me was not to be travel weary. Not to have a sense of an ending, or even a sense of fulfilment. It was rather a sense of resolution. To recognise that my own life had been led not to an ending but a new beginning. And that to dedicate myself to the consistent popping of this illusory balloon of hatred is not a calling, but simply somewhere I’ve been led to.

I refuse to subscribe to the sense of pervading doom that seems to have come upon us. This idea that there are forces in motion that we are not a part of, that we cannot effect, cannot lend our voice to. Rather it is a time to think of what we can do. To double down our sense of faith and of commitment. To those we love, and to those that love. To think for a moment “who am I”? To join as a generation. And to recognise our own power. If nothing else I believe in the power of a society of voices and actions and at the impact they can have. Must have.

So at this point, I just want to say thank you to all the people who have blessed my journeys. You’ve shaped my thought, my being, my way of looking at the world. And across the continents you have shown me that there is nothing to fear. And I also promise, in my tiny tiny way, that I will cherish the gift of your love by not allowing it to remain static in my heart, but as something to pass on. It is in that that I find my purpose, and in that action that my life is given shape and meaning. So to all of my Journeys, thank you for your gift. At the end of this journey I recognise there is no ending, just a beginning, and ahead, a new journey x Jim

Please let me know your thoughts in the comments – or any questions about my next steps, or how you are feeling about the state of things globally.