Some notes on the extremities of human experience, the different characteristics of aloneness and the challenge of following a disco band with a solo acoustic set…. 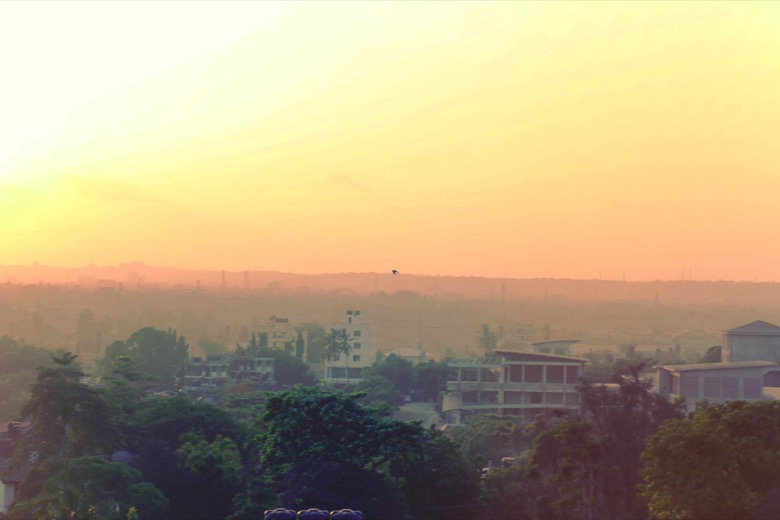 Dar Es Salaam slowly unfurls itself. It has been for me so far a city of extremes – of the buzz and energy of the gigs, and some extreme bouts of loneliness.

One of the characteristics of Journeys is how to find balance within the twin extremes of the experience.

On the one hand there is the intensity and busyness. Travel requires energy and alertness. Self reliance requires a heightening of the senses. Doing the documentary work requires an eager eye and an intuition of the rhythms of a culture. Stepping on people´s sensitivities is not something Journeys is about – but equally the reinterpretation of a place through the vista of one individual´s mind is something it is about. So there is a weighing of how to conduct one´s self, say, if you are shooting in a predominantly Islamic City like Stone Town.

There are many people met along the way – sometimes strangers, sometimes hosts, sometimes guides, and sometimes someone just hustling you. It has been a privilege of my life to witness how people are curious about musicians – and sometimes this shatters one´s aloneness beautifully and sometimes it invades your needed moments of inner exile.

Another quality which is high in energy demand is the fact that the gigging terrain is very uncertain when playing somewhere in East Africa or China. First of all you never know what the venue is going to be like before you arrive. Yesterday there were serious power cuts in Dar Es Salaam and my host at Makuti, Mzungu Kichaa spent the day hunting a generator and patching up problems so we could all perform. Where as at another show there won´t be a P.A and you will strain your voice over tourists with little conception of the etiquettes of a concert. Or at another, like last night, you will arrive to a venue buzzing and dancing to a fantastic full band with a local singer giving Whitney Houston a run for her money, and then navigate entering the stage as an acoustic artist while simultaneously the Manchester United game starts in the background. Funnily enough – i enjoy all of these experiences – they provide the soul stuff of Journeys.

But then there is the other side. You get exhausted from the travel, the meeting people, the shows, drinking not a lot, but enough to accrue in your system.

The buzzy-ness of the one side of experience is suddenly met by its opposite. Extreme isolation, a mind unprepared to suddenly meet with negotiating itself. The subconscious is a busy place and is always revealing itself to us – sometimes through feelings of well being and flow. And at other times in revealing its amorphous content through its confusing imagery, dumped suddenly and randomly and without an apparent identifying characteristic. What is it bloody saying?!

I often find that my subconscious is suddenly awakened once I get back into isolation. Sometimes there is a simple of joy of having a day off – such as the day I enjoyed in Arusha. But other times, you spend a day in a hotel room on a foreign continent and you have to simply face what is coming up. Those demons who announce themselves and are not as polite as vampires – who at least have the courtesy of requiring an invitation before entering your house.

It was a day during which I felt like Harry Haller, the central character in Hermann Hesse´s Steppenwolf. Or even more so like Hesse himself, who wrote the book in great aloneness after being estranged from his second wife, wrestling with illness, drinking to much in the evening and living an isolated life in a rented flat in Zurich. For an interesting article on Hesse please check the link.

Anyway I will write more about these wrestlings at a later date. For now, it is helpful for me to express and write about my internal journey. For me, again, the concept of Journeys is not about travel, but about the exploration of how one´s mind, one´s creativity and one´s life is effected and shaped by the ongoing march of reality – in all its shapes, forms, and dimensions. Again, to use Hesse´s words:

“There is no reality except the one contained within us. That is why so many people live such an unreal life. They take the images outside of them for reality and never allow the world within to assert itself.” Hermann Hesse

For now, I am back in my Harry Haller space – writing after the adventure of a long and eventful evening. I played two shows in Dar last night – at Makuti and Q-Bar. It´s amazing how different 2 shows can be in the space of a few hours – but equally enjoyable in 2 very different ways.

Makuti was a very attentive, seated audience and the other musicians quite simply mind blowingly good. I greatly enjoyed seeing Mzungu Kichaa play. We had met while jamming on stage in Zanzibar and I quickly became aware of what a monster talent I was playing next to. Apart from that he is a man of great generosity and humility – one of those people that gives you great faith to know roams the planet.

The second show was at Q-Bar – filled with mania, buzz, dancing, drinking, howling, shrieking and characters from the underworld. It was a lot of fun.

Finally – a final word on extremity. My whole life i have wrestled with the extremes of life, and more so of mind. For whatever – probably foolish – reason, I chose a life which does not often provide me with the very thing that on some level I yearn for – stability. However, I have found one thing. I have found that by continually saying yes to the extremes of life – yes to the adventure, yes when I feel afraid, yes when I don´t feel like doing something – that life has created in some way, its own balance in me. It is not one I fully understand. But I knew right back since school days that I had an unpredictable mind, that at times I felt deeply afraid of. The idea of an office job terrified me – not because of boredom – but because I feared that other people would witness at too close a hand the insanity I felt. And with having mental illness in the family on both my mother and father´s side, I greatly feared being sectioned. This is something historic for me now – through the choices I have made, I feel a distance to these old, and extreme fears. But what has led to this evolution has been a willingness to say yes to life. And if there is one thing I would say when you feel in a deep hole, or an uncertain space. Say yes none the less. Your feet will lead you to the next place and space – if you let them.