A CONVERSATION WITH AMERICA

I’m really proud to announce my new documentary – A Conversation with America! Below are some thoughts on the motivations behind making the film ☞ 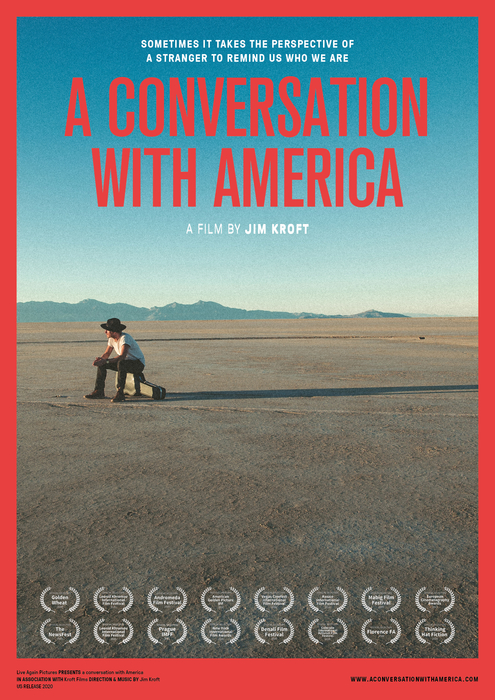 A four year journey has come full circle. And like all full circles, it leads to a start.

My three months in the US during the presidential election of 2016 combined twin aspects of my curiosity – the kid with a beatnik’s heart who always dreamed of following in ol’ Sal Paradise’s footsteps – and the adult who wants to grapple with the stuff the world – and stare it in the eye.

Much of my work is an effort to wrestle with the state of the world – that is our modern history – and within my limited capacity as a human being – to try to make some type of contribution.

I am unperturbed by the futility of this task. The world has squashed my dreaming enough to reveal a tougher core. As such I am years passed any fantasy of directly effecting anything. But I am within a deeper knowledge that our lives – that is every action we make – has ripples beyond our imaginings.

At the core of this understanding is a will simply not to be inert – that is passive before the tide of history. It moves me greatly to see social activism growing so much, as if society is waking out of a long slumber.

For my part, my activism happens within a spirit of independence – I’ve had too many bad experiences of groups to attach my will to other people’s decision making. It gives me a type of freedom, but sometimes makes manifold tasks which would be so much easier with outside help.

As such, “A Conversation with America” has taken some years to get made. Curiously enough, in part due to its inspiration – which was shooting The March of Hope

I’d received all types of death threats while filming, and especially while raising the money for The Boat for Sara – which eventually made its way onto the Sea Watch ships on the Med.

It highlighted the xenophobia in society, and I felt it the more profoundly because my own life had become so entangled with the suffering, joy, gentility, embrace, kindness and bravery of so many of the refugees I met who had fled from Syria, Afghanistan and Iraq.

And it made my fucking blood boil.

We all have the capacity for all the colours of the human spirit, and I was troubled a how vociferously I felt this anger. Moreover, at whom was it pointed?

I resolved to find out more, and became obsessed with exploring Populism – not just in its modern day manifestations, but deep into history, even taking a tour guiding job while editing “The March of Hope” to force my reading and understanding of how Hitler came to power in the 1930’s.

I had always been a keen follower of American elections, and so when Trump won the Republican nomination, I realised that modern Populism had discovered its own figurehead. So I booked my flight and resolved to find out what people were voting for.

I am really looking forward to sharing my discoveries – discoveries which deconstructed my own understanding and preconceptions of what “Populism” is. In many ways the film subverts a lot of the “isms” you read in many of the books you can read on the subject. Because it is not a study based on graphs and sitting at tables considering political science. It is a study based on landing in NY city, chasing history and watching it recounted in the mysterious language of serendipity – that is by the people I came across, was guided by and in many cases, came to love.

Getting this film made has been an epic journey. Between juggling my daily work, musical releases and how busy the “The March of Hope” kept me, I have had to dig in deep to get it made.

I’m really proud of the result, even if there will – as ever – be part of me that recognises it is bound by the limitations of a punk rock heart and a DIY attitude. But then again, it would never have gotten made without them.

And if there is something I learnt about dreams over the years – it’s better to get something made dirty than to leave it clean in the closet.

Love to all and thank you, as ever for all the support for so many years ❤️

Big up my dearest brother @lucasdietrich for the design of a 10 poster series, each expressing different aspects of American life